Although recent years have brought about a greater awareness of the importance of diagnosing and treating peripheral arterial disease, pathology of the venous system has received little attention. Peripheral venous disease was first mentioned in the medical literature in 500 B.C., when Hippocrates described an association between leg ulcers and varicose veins. Despite longstanding recognition, understanding of issues surrounding venous hypertension and resultant venous incompetence has lagged.

Peripheral venous disease is four to five times more prevalent than peripheral arterial disease, and the clinical presentation of lower extremity venous incompetence spans a broad clinical spectrum from telangiectasias (spider veins) to long-standing and recalcitrant venous stasis ulcers. This spectrum of disease manifests from cosmetically displeasing lesions on the legs to threats of serious secondary illnesses such as infection from chronic ulceration.

Venous disease has a hereditary component, and children of patients with varicose veins are more likely to develop problems related to venous reflux. The disease is more frequent in women and the incidence rises with number of pregnancies. Occupations characterized by inactivity, such as standing or sitting for long periods of time, also place patients at risk. It is estimated that up to 28% of the adult population will suffer from symptomatic venous disease at some point in life.

Traditionally, treatment of venous incompetence has consisted mainly of surgical “vein-stripping” procedures, during which large veins from the superficial collecting system of the legs are ligated and/or removed under general anesthesia. These surgical procedures, while effective, are associated with the risks of general anesthesia, infection of surgical wounds, long recovery times and considerable patient discomfort.

The recent development of minimally invasive treatments for venous reflux disease has changed the way varicose veins and other venous diseases are being treated. It is now possible to achieve the same results of the surgical vein-stripping procedures by performing an office based, minimally invasive procedure that typically takes less than one hour. Patients can return to work the same day and patient satisfaction and efficacy are higher than the surgical alternatives. 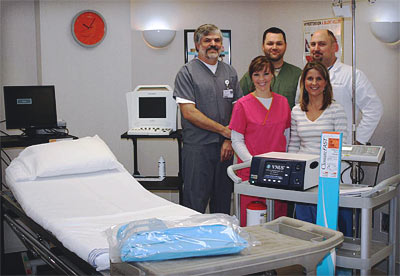 At the new Oklahoma Heart Institute Center for the Treatment of Venous Disease, we offer consultation and a range of conservative or minimally invasive therapies for the treatment of symptomatic venous reflux disease. Call 918-592-0999 for additional information.