They both graduated from Toccoa Falls College, Georgia, and earned their masters’ degrees from the University of Georgia. Later, both obtained doctorate degrees and married men with the first name of Louis. They had similar careers, teaching professional development. Every year, they worked together to present seminars and a week-long challenge of excellence camp every summer.

Summers lives in Carlton Landing and Lee lives just 10 minutes away on Lake Eufaula. Both are now widows.

“I can't tell you anything in my life that doesn’t involve her,” Summers said.

Even their health concerns took similar paths, as they both live with type 2 diabetes and high blood pressure. However, their health paths took different routes once Summers started developing cardiac issues.

“About 4-5 years ago I went to the emergency room because my foot was red and severely swollen,” Summers said.

A cardiologist diagnosed her with atrial fibrillation (AFib) and immediately sent her to the intensive care unit (ICU). AFib is a quivering or irregular heartbeat (arrhythmia) that can lead to blood clots, stroke, heart failure and other heart-related complications.

Watch an animation of a heart with Atrial Fibrillation from the American Heart Association.

People with AFib can experience some of the following symptoms: 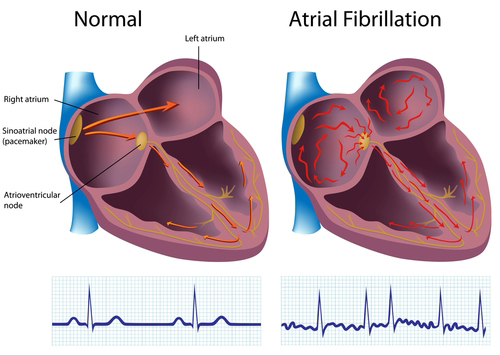 To combat Summers’ AFib, doctors installed a stent close to her heart. The stent is a small tube placed in a hollow area, like an artery, that keeps the area open and free from blockage. Once installed, her heart converted back to a normal rhythm and she was sent home with medications.

Despite the medications, Summers’ AFib continued, and she eventually saw Siva Soma, M.D., an electrophysicist at Oklahoma Heart Institute (OHI).

“Dr. Soma was fantastic. It's the first time I felt like somebody really understood my condition and that they had a solution for me,” said Summers.

Her physician first recommended a cardioversion, a medical procedure where an abnormally fast heart rate or other cardiac arrhythmia is converted to a normal rhythm using electricity or medication.

When Summers’ AFib continued, Soma later determined she needed an ablation, a procedure that treats atrial fibrillation. It uses small freezes or burns to produce scarring on the inside of the heart to break up the electrical signals that cause irregular heartbeats. This procedure can help the heart maintain a normal heart rhythm.

“I'm forever grateful to him for sticking with it,” said Summers. “I had the ablation February 4, 2020, and I feel so much better. I've been in normal rhythm ever since!”

When asked if she has any plans or goals now that she’s feeling better, Summers pondered for just a moment.

“Reflecting on the life I've had, it’s been a good life,” she said. “There's nothing left on my bucket list and that's the absolute truth. I’ve traveled a lot and done it all. Now I'm just savoring every minute and every experience with my grandchildren. Life is good.”

Summers does have people to thank.

“Without using all the superlatives that are in my vocabulary, I just want to say that Dr. Soma, his physician assistant Dacia and the entire cardiac team in Tulsa are just outstanding. I have recommended them to others. I'm just so glad I had that cardiac team,” she said.

If you think you may have symptoms related to AFib, talk to your provider. You can also schedule an appointment with Dr. Soma by calling (918) 592-0999 or by completing the form on our website.