Heart disease doesn’t have a “look.” If it did, Master Sergeant Chris Clifton, 42, certainly wouldn’t fit the description. Last October, his unit – the 219th Engineering Installation Squadron with the 138th Fighter Wing of the Tulsa Air National Guard – was scheduled to deploy to Japan. Clifton had given up his spot, so that a younger airman could gain that experience. That meant he was home to complete his upcoming annual physical training test required by the Air Force. “I was feeling good that morning,” he recalls. “No indication of anything odd that would have led me to think a heart-related incident was about to occur and change my life mentally, physically and spiritually.”

If anything had been odd, Clifton would have likely felt chest pains like those he experienced beginning in April of 2014. In 2014, he had chest discomfort that seemed mild and not likely to be heart disease. He was the picture of health, vigorously exercising daily, with no apparent reasons to suspect he had heart disease. However, his primary care physician was concerned because of a mildly abnormal EKG.  Clifton then had a stress test that was also mildly abnormal.  He was referred to Oklahoma Heart Institute. To answer the question of whether or not Clifton had heart disease - which seemed an unlikely reality for the then 41-year-old - a cardiac CT was performed. “It was surprisingly severely abnormal,” shares Oklahoma Heart Institute cardiologist, Dr. Roger Des Prez. While coaching his son’s football practice one late August evening, Clifton received the news from Dr. Des Prez that he had severe heart disease. Dr. Des Prez recommended an invasive dye test, which led to a heart catheterization and then to the placement of four stents to open 70 percent blockages. “That’s when reality really hit me,” he says. Clifton maintained his new regime following his stent procedure – working out as normal and taking his heart medication.

Fast forward a year to Sunday, October 4, 2015. The physical training test was due. “I was up for the challenge,” he says. “My goal was to score 100.” The test began at Mohawk Park at 8:30 a.m. “I maxed out my pushups and sit-ups. Then it was time for the third and final part of the test – a 1.5 mile run.” Clifton finished the run around a 7-minute pace and came in with a total score just under his goal of 94.

“He actually did really well,” recalls Technical Sergeant Aaron Wilson, RN. “He smoked me. He was pacing people back to the finish line.”

After his run, Clifton, a First Sergeant supporting his fellow airman, went back to help others finish by jogging in with them. “I wanted to be there with them until the last person from our unit crossed the finish line,” he shares. Afterwards, he visited with groups from his unit to see how they all did, as they waited for the buses to take them back to base. “I turned around to check on a fellow airman, who I had finished the run with. She was still pretty flushed from her run. I said, ‘Are you okay?’ She replied, ‘Yes.’”

“That’s when it happened. Immediately after asking her how she was doing, I literally took two steps and the ground started spinning,” Clifton recalls. “I took a knee and told her I wasn’t feeling well. That’s the last thing I remember.”

“He was 10 feet away from me,” says Technical Sergeant Aaron Wilson, RN. “I saw him just drop.”

The fit father of three began to seize as everyone started to rush by Clifton’s side to figure out what was happening and how to help him.

Fortunately, two VA nurses in his unit - Staff Sergeant Travis Bryant, RN and Technical Sergeant Aaron Wilson, RN - and 21-year military veteran Master Sergeant Mike Coussou, who had just completed a 16-week EMT course, were nearby Clifton when he collapsed and passed out. The 138th Fighter Wings Fire Department was also on location with an AED (automated external defibrillator). Firefighters Staff Sergeant Mark Gardner and Senior Airman Houston Nole were by Clifton’s side within minutes.

“That’s what we’re trained to do,” says ICU nurse Bryant. “I started asking questions about his health. Did he have seizures?” Bryant quickly learned that Clifton did not have a history of seizures, but might have heart disease. “At that moment, I said, ‘We need to get his shirt off and get an AED on him.”

Coussou agreed. “I was standing in close proximity,” he shares. “I heard someone say that he had stents and I thought this was a heart issue.” Coussou yelled out for someone to call 911. The firefighters already had a 911 operator on the phone, giving their location.

“I was worried about him,” recalls Wilson. “I said to get the AED on him so we can listen to see what his heart rhythm is doing.”

“I saw an abnormal ventricular rate on the AED and knew he needed a shock,” says Bryant.

“I heard the voice that a shock was advised and pushed the button to deliver the shock,” says Coussou. “I had just finished EMT training. When you need an AED, you never hear ‘shock advised.’ It was surreal.”

The shock was delivered to Clifton’s heart.

“It went back to sinus (normal) rhythm – between 105 and 110 beats per minutes,” adds Wilson. “Then all of the sudden he wasn’t breathing anymore. There was no pulse.”

Without hesitation, Wilson started CPR. “I jumped on top of him and starting giving chest compressions.” Within 30 compressions, Clifton responded.

“He opened his eyes and started to rise up a little,” recalls Coussou. They immediately rolled him over to his left side, making sure his airway was clear. “We were doing what we could to make sure he stayed with us.” Paramedics arrived within minutes.

“My hearing came back first,” Clifton says. “I woke up hearing people say, ‘Come on, come on, Chris!’ I felt like I was in some sort of a dream – like being in a dark tunnel. I could hear people yelling someone’s name. I didn’t even know, at the time, that they were cheering me on or had any idea what had happened. Then I felt my strength come back to my body. I squeezed my hands. It was like coming out of a deep, deep sleep when my eyes opened.”

Clifton says he thought to himself, “Where am I? What am I doing?” After a few minutes of taking in the scene around him, Clifton realized what had happened.

“He is one of my best friends,” shares Wilson, who has served in the Tulsa Air National Guard for 11 years – six of which have been with Master Sergeant Clifton. Wilson jumped into the ambulance with Clifton, who was transported to the Oklahoma Heart Institute and rushed back to the cath lab. He had a new blockage that was stented by Dr. Kamran Muhammad. A few days later, Clifton had an internal defibrillator placed by Dr. Craig Cameron to help keep his heart in rhythm if it were to go back to ventricular fibrillation. He received a new type of device that is small and not as bulky or invasive as conventional defibrillators. 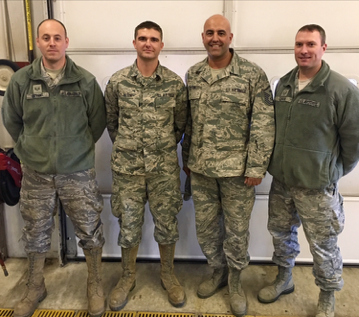 “He is the best First Sergeant I’ve had,” shares Wilson reflecting on that October day. “He looks out for all the enlisted troops. It really surprised us, but we know if something like that had happened to one of us, he would have been there for us.”

“I am very humbled by this experience,” shares Clifton, “and I feel blessed by my Heavenly Father to have been given a chance at life again so that I get to spend more time loving my children and being a dad. I look forward to spending time with my family at home and my second family at the 219th Engineering Installation Squadron as a First Sergeant and at the 138th Fighter Wing as an F-16 maintainer.”

Master Sergeant Chris Clifton has served overseas three times – once with the U.S. Army in Operation Joint Endeavor from 1996 to 1997 and twice with the U.S. Air Force in 2006 with Operation Iraqi Freedom and in 2013 with Operation Enduring Freedom. He has more than 21 years serving in the military and is very proud to have been given the opportunity and privilege to serve this great nation.

Do you know your risk of having a heart attack? Schedule a life-saving screening. To learn more, click here.